Tracking the fortunes of the white working-class 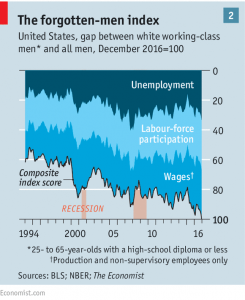 IN 1922 Donald Trump’s father, Fred, left high school at 16 to work for a carpenter. He was a “very smart guy” who could “add five columns of numbers in his head”. Construction came naturally to him, too. By 1971 he had amassed a multi-million-dollar fortune. Working-class success stories like Fred’s are rare in America, and becoming rarer. The president wants to see more of them.

At his inauguration he declared that America’s “forgotten men and women” will “be forgotten no longer”. And he has vowed to bring back jobs to states that have been “hurt so badly” by globalisation. By America’s forgotten people, he means above all white working-class men: three-quarters of white men who left school at 18 and voted in November did so for Mr Trump, the highest share of any demographic group. 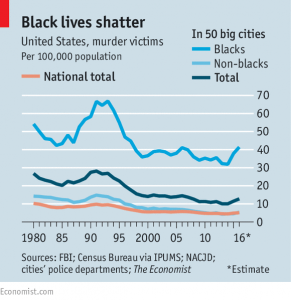 MURDER, which grew rarer for 20 years, is on the rise again. But by how much? In 2015, the number of murders increased by 11% nationwide. During 2016, an escalation of gang violence in Chicago left 764 people dead in a city where 485 had been killed a year before. A dispute ensued over whether the Windy City was simply an isolated example or a barometer of a wider problem.

National statistics for 2016 will not be released for eight months, but to get an early sense of the answer The Economist has gathered murder statistics for 2016 for the 50 cities with the most murders. These places contain 15% of the country’s population and around 36% of murder victims. Our numbers show that, in 2016, murders increased in 34 of the cities we tracked. Three cities experienced a spike in deaths sharper than the 58% suffered by Chicago. Since cities tend to reflect the country as a whole, this suggests that the murder rate is rising at its fastest pace since the early 1970s. 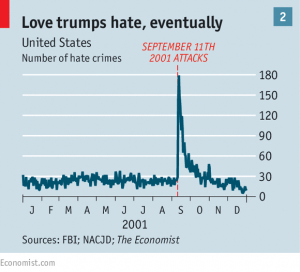 ON THE morning of November 18th, two swastikas and the words “Go Trump” were found daubed in a children’s playground in Brooklyn. This is one of 360 hate crimes being investigated by New York’s police department in 2016, an increase of 35% over 2015. Andrew Cuomo, the governor of New York, has set up a special unit to tackle the “explosion” of such crimes in the state. In the Senate last month, Harry Reid, the minority leader, said that Donald Trump’s election had “sparked a wave of hate crimes across America. This is a simple statement of fact.” But look more closely and the facts become more difficult to establish.

I shall post some of the underlying code to Github in due course. 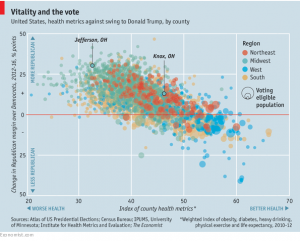 …on November 15th Patrick Ruffini, a well-known pollster, offered a “challenge for data nerds” on Twitter: “Find the variable that can beat % of non-college whites in the electorate as a predictor of county swing to Trump.” With no shortage of nerds, The Economist has taken Mr Ruffini up on his challenge. Although we could not find a single factor whose explanatory power was greater than that of non-college whites, we did identify a group of them that did so collectively: an index of public-health statistics.

I intend to post the underlying code for this to Github in a few weeks. 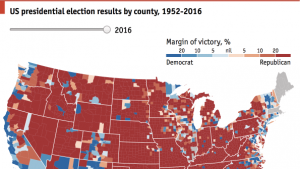 As our map of America’s voting patterns on a county-by-county basis going back to 1952 makes clear, Mr Trump’s gains were concentrated in rural areas across the northern United States. Republicans have long held the edge in America’s wide-open spaces, but never has the gap been this profound: a whopping 80% of voters who have over one square mile (2.6 square km) of land to enjoy to themselves backed Mr Trump. As the scatter plot below demonstrates, as counties become increasingly densely populated, fewer and fewer vote Republican. American politics appear to be realigning along a cleavage between inward-looking countryfolk and urban globalists. Mr Trump hails from the latter group, but his message resounded with the former.

Read more and check out the interactive map on Economist.com

In America, who votes may matter more than how they vote

ON A crisp autumn afternoon, armed with “I’m with her” balloons, a boombox and a clipboard, Eli Clark-Davis sets out dancing down the street with his friends to get out the Democratic vote in Fishtown, a gentrifying neighbourhood in Philadelphia. The group’s mission is to knock on as many doors as possible, reminding registered voters of whom they should back, when election day falls and where to cast their ballots. They ask potential supporters to sign an “I commit to vote for Hillary” slip, which the campaign hopes will adorn refrigerator doors. Hillary Clinton’s campaign has set up 300 of these “staging posts” across the Pennsylvania, from which armies of volunteers set forth to mobilise her party’s base. On the campaign’s penultimate weekend, they knocked on 500,000 doors—roughly one-tenth of the households in the whole of the Keystone State.

The anger and fickleness of voters are forcing change. But in which direction? 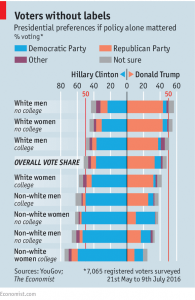 BIG structural changes to political parties happen only once in a generation. Academics reckon that in 219 years America has seen just six different party systems, each attracting a distinct coalition of voters. Donald Trump’s idea of turning the Republican Party, long the ally of big business, into a “workers’ party” may yet force a seventh. To track the trend, The Economist has melted down the American electorate into their policy choices and priorities alone, freeing them from party labels to see what kind of winning policy platforms might emerge in future.

Does Uber substitute for cabs or attract new riders? It depends where you live 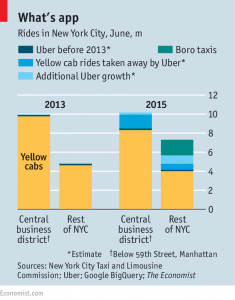 EVER since Uber arrived in New York in 2011, the days of the city’s yellow taxis have seemed numbered. Catching a cab requires standing outside until one drives by, giving directions if necessary and rummaging for cash. In contrast, Uber lets riders summon a car by phone, informs them when it is outside, feeds the destination into navigation software and lets them walk out upon arrival.

The markets believe yellow cabs are in trouble. The average price for New York’s 13,771 medallions (licences to drive taxis) has fallen from $1m during the summer of 2014 to $690,000 over the past three months. But attributing these woes to Uber is difficult. Not all Uber passengers would otherwise have hopped in a cab—some might have taken the subway or bus, walked, cycled or stayed at home. Moreover, Uber is not taxis’ only new source of competition. In 2013 the city introduced apple-green “boro taxis”, which serve passengers outside the Manhattan core, and launched a bicycle-sharing scheme.

The British East India Company’s ships flew an ensign incorporating the Union Jack. Today corporate nationality is harder to determine. Take Coca-Cola, the epitome of Americana. Less than half its sales and staff hail from its homeland, though its boss and most shareholders do. According to The Economist’s “domestic density” index, it is 62% American. The measure (which combines the shares of sales, staff and owners that are domestic, and the boss’s nationality) casts new light on recent merger debates. 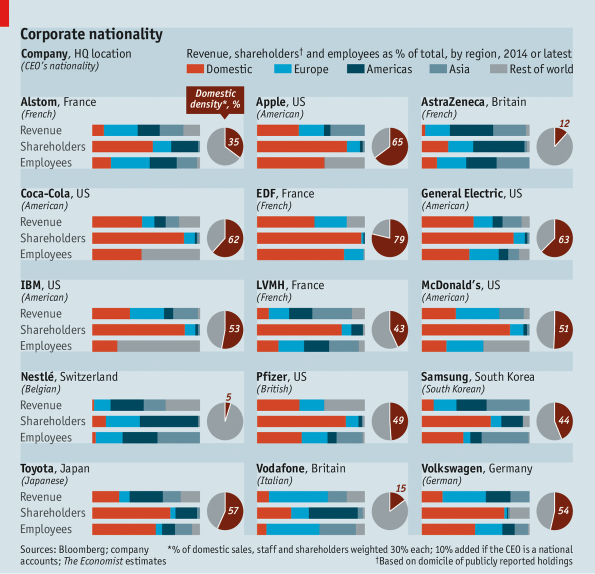 On May 15th the French government, vexed by an offer by America’s General Electric for parts of Alstom, extended its powers to block foreign takeovers in “strategic” industries—although by our measure Alstom is only a third French. Some Britons are worried by a bid from Pfizer, a notionally American drugmaker, for AstraZeneca: they would like to protect what they see as a national champion. But AstraZeneca’s domestic-density score is a mere 12%. It paid no British corporation tax last year, just a quarter of the company is domestically owned and the boss is French. Flying the right corporate flag has never been harder.