NEW YORK may have a reputation as a brusque, unfriendly place, but to those who buy expensive properties, at least, it can be very welcoming. Take the anonymous owner of the penthouse in Midtown Manhattan’s 90-storey One57 skyscraper. The flat sold for $100m in December, a New York record. The city collected a modest $2.8m in taxes, 2.8% of the price, when the deal went through. And the new owner’s first annual property-tax bill came to $17,268, just 0.02% of its value. 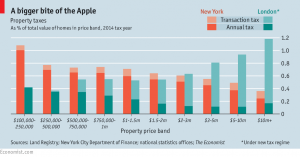 In contrast, if Britain’s main political parties can agree on anything, it is that expensive homes in London should be taxed heavily. In 2009 Vince Cable, a senior Liberal Democrat, first proposed a “mansion tax” on residences worth over £1m ($1.6m). Five years later Ed Balls, then Labour’s shadow chancellor, said he aimed to raise £1.2 billion a year from a similar policy. Not to be outdone, last December George Osborne, the Conservative chancellor, raised stamp duty, a levy on property purchases, for houses worth more than £1.13m. A hefty 12% of the portion of the sales price above £1.5m now goes straight into the government’s coffers.