When Cisco was crowned as the world’s biggest company by market value in April 2000, its boss hoped it would go on to become the first firm worth over $1 trillion. But its reign was to prove short-lived: deposed by Microsoft two days later, it never regained top spot. It is now in 53rd place. 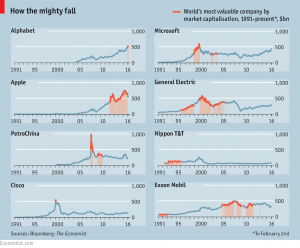 Cisco may be a cautionary tale for Alphabet, Google’s parent, which on February 2nd usurped Apple to become the world’s most valuable listed company, only to slip back behind the Cupertino-based firm the next day. Come what may, however, Alphabet is now a member of a select club of firms that have led the league over the past quarter-century.