ON JUNE 23rd Britons will head to the polls to answer a simple question they have not been asked since 1975: “Should the United Kingdom remain a member of the European Union or leave the European Union?” If the answer is “remain”, Britain will continue to integrate with the EU’s 27 other countries. If it chooses to “leave”, the Kingdom may split apart and begin to drift gently into mid-Atlantic obscurity. 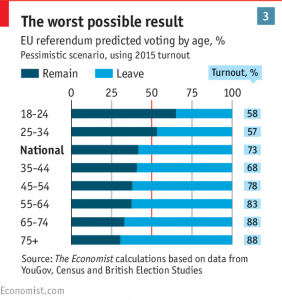 “Remain” has led in the polls for almost the entirety of the campaign. In early June the “leave” side surged, and briefly appeared to have taken a decisive lead. But the tragic murder on June 16th of Jo Cox, a pro-EU member of Parliament, may have helped swing the polls again in recent days. On the surface, this has restored a narrow edge for “remain”. However, the share of people saying they intend to vote for “remain” has not actually increased. Instead, a sliver of the electorate has simply switched from “leave” to “don’t know”. With just one or two percentage points splitting the two sides, the outcome will depend largely on the 10-15% of voters who say they are still undecided.