The media reflects the bias of its readers; not the other way around 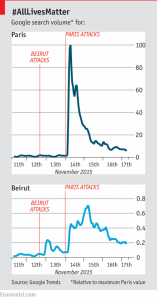 IN JUST two days last week, the terrorists of Islamic State (IS) murdered 166 civilians outside their home base of Syria and Iraq. The group claimed responsibility for two bomb blasts that killed 37 people in Beirut on November 12th. The following night, 129 died in a series of co-ordinated attacks in Paris. The shootings and explosions in France set off a global outpouring of sympathy, grief and support: for the first time, Facebook activated its “safety check” feature for an event other than a natural disaster. It also allowed users to change their profile photographs to incorporate the hues of France’s tricolour flag with a click.

Before long, online critics began to object that the social network had not taken similar measures in response to the Beirut attacks, and more broadly that the press had ignored equally tragic deaths in the Arab world. #AllLivesMatter, a Twitter hashtag, began trending as a riposte. In turn, responses sprouted up justifying the discrepancy, arguing that it is Western readers who ignore coverage of far-off atrocities, and that mass violence is less common, and therefore more newsworthy, in France than in Lebanon, whose bloody civil war lasted until 1990 and which borders Syria.