Bolthole money pushes prices up for local and foreigner alike

MANY Americans were taken aback when news broke in January that Peter Thiel, an internet billionaire and adviser to Donald Trump, had New Zealand citizenship. For five years this backer of an “America first” president had kept his Kiwi passport quiet. Then the government released details of his $10m-lakeside estate. 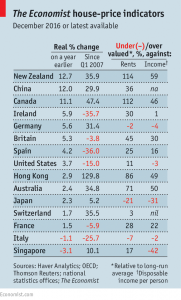 A growing horde of rich foreigners see New Zealand as a safe haven. In 2016 overseas investors bought just 3% of all properties. But their purchases were concentrated at the expensive end of the market, which is growing fast: sales involving homes worth more than NZ$1m ($690,000) increased by 21%. That helped push prices in the country up by 13% over the past year, to lead The Economist’s latest tally of global house-price inflation (see table).